Live Banned is a band. Yes, that is the name of the band. We are from Bangalore. Formed in 2011 and over 120 shows old, the band has entertained audiences and hipsters across India with our humour, stage act, wacky costumes and a unique sound which fuses various genres, giving it a South Indian twist. Formed as a ‘live only’ band that parodied popular film and cheesy pop music with tight rock, metal and electronic arrangements, Live Banned finally decided to bring out a full length album due to popular demand. The 7 track debut album ‘If you park here your tyre will be air out’, which also features the super hit, ‘The Auto Tune’, is full of social commentary, satire, South Indianised English, and a sound that brings the ‘mass’ and class together. 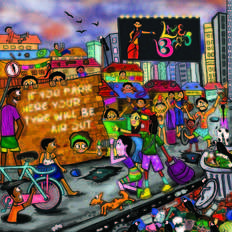 If You Park Here Yo...
by Live Banned