Singer-songwriter Mili released her first single “Keep The Hope Alive!” In July 2020, which aims at keeping our spirits up, as the whole world is fighting against the pandemic.

She wrote and composed her debut album Written in the Stars and released it on December 15th, 2017, not just marking the realisation of a dream, but also the first step towards being heard by a global audience.

The diverse draw of music for Mili came from being around music from India and the West from early on in her life. In India’s music landscape, it didn’t take Mili too much time before she was picked to lend her voice to the country’s top composers. She took up the opportunity and gained a fan following for songs like Badari Badariyaan & Yatra from the show Coke Studio@MTV Season 2, ‘Meethi Boliyaan’ off Kai Po Che! composed by Amit Trivedi and Tamil song ‘Parakka Seivaai’ off Ambikapathy composed by A.R. Rahman. Mili says, “Not being the conventional film music singer and to be accepted for my individuality, it felt great that they became hits!”

On the day that Mili began recording her album in Los Angeles, her unparalleled crew of musicians entered the studio. Drummer Vinnie Colaiuta was coming in from touring with Sting and guitarist Michael Landau had just got off the road with James Taylor. Also in the studio were pianist George Whitty (who has recorded for the likes of Brecker Brothers and Celine Dion) and bassist James Genus (a common face as part of the Saturday NightLive band and bass player to tunes by everyone from Herbie Hancock to Chick Corea).

She says, "That it all came together was like a dream playing out in real life. To be in a studio in LA; surrounded by the best musicians in the world, playing my songs! It was the universe flowing through that studio. Those moments felt so right, like it was always meant to be. And I remember thinking, 'With love like this, it has to show in the music.' And I think it does.”

When she was in Los Angeles, she also shot a studio performance video for the airy ‘Dream Like a Skylark’, the centrepiece of her album. Being in the same room as musicians who’ve worked with the likes of Sting, Frank Zappa and more, Mili says she definitely felt the reality of her dream. “This was the first time I was putting myself out there as a songwriter and It is truly satisfying when you are living and performing in the moment, watching all that you’ve worked so hard towards materialising right in front of your eyes with the best musicians.”

Every song bears a unique sound that unmistakably belongs to Mili. “I get ideas and inspiration actually anytime, anywhere. People, stories, moments, situations... Writing songs is such a personal experience. It’s about following my instinct, and when it all finally aligns, it only validates the very purpose of what is meant to be. That is the greatest freedom and life experience I’ve had with songwriting.” 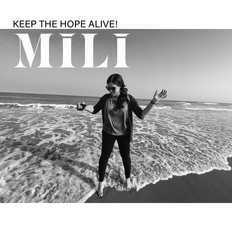 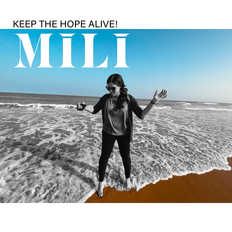 Keep The Hope Alive...
by MILI