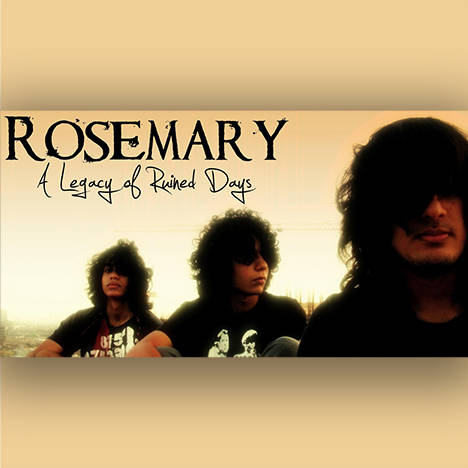 Rosemary was a 3 piece grunge band from Mumbai active from 2007 to 2011. The band, which consisted of Achint Thakkar on guitar & vocals, Suraj Manik on bass, Jason D’souza on drums (2007/08) followed by Aditya Ashok (2008 onwards). The band went on to be fairly popular in the college and club circuit due to their energetic stage presence & catchy hooks which led them to receiving several accolades including the Jack Daniel’s Award for ‘Best Emerging Artist’ in 2008 and the Toto Funds The Arts award in 2010 in addition to winning many college competitions like IIT Mood Indigo, NLS Strawberry Fields & BITS Pilani etc. During their relatively short lifespan, Rosemary developed a small yet cult fan base in the music scene.


The trio released their first and only EP titled ‘A Legacy Of Ruined Days’ in 2011 before dissolving the band. The release features 6 tracks which include crowd favourites such as ‘Bliss’ & ‘Sapphire Constellation’ and their 2008 breakthrough banger, ‘Golden Trees’.

Rosemary was a 3 piece grunge band from Mumbai active from 2007 to 2011. The band, which consisted of Achint Thakkar on guitar & vocals, Suraj Manik on bass, Jason D’souza ...