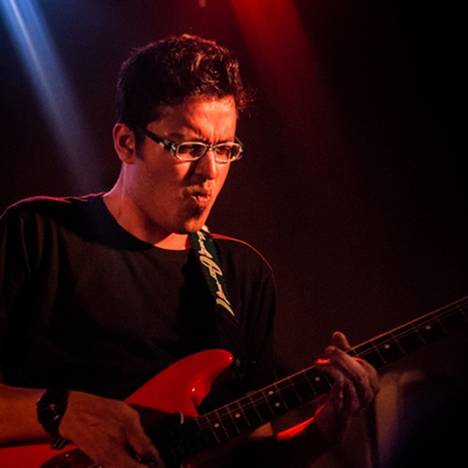 Composer/Guitar Player/Music Producer Bodhisattwa Ghosh, a.k.a “Bodhi” is a disciple of Indian Guitar Legend Amyt Datta, and an endorsee of Fender Guitars & Amps USA and Ernie Ball USA. As a composer and a guitar player, he has been constantly striving to break boundaries in music and establish his own sound, throughout the 20 years so far of his career. Studying the forms of Jazz, Blues, Rock and Indian Classical/Traditional music, he has established himself as a unique musician with a signature sound of his own.

In his solo project, Bodhi explores his sound as a Guitar Player in the realm of Contemporary Rock, and wishes to collaborate with Artists and Music Producers from across the globe, with each composition he presents.

A musician who believes in the continuous process of learning, he has gathered experience in performing in over 20 countries, collaborating with Artistes from all over the world, some of whom are drummer Jim Black (USA), Saxophonist Soweto Kinch (UK), Tabla Player Tanmoy Bose (India) to name just a very few.

Bodhisattwa has previously been a part of numerous outfits such as Ethno Jazz outfit “Kendraka”, World Music ensemble “Taal Tantra”, Electro Rock outfit “Zoo”, and is currently an integral part of his brainchild- New Jazz/Avant Garde outfit “The Bodhisattwa Trio” and Vernacular Rock veteran outfit “Lakkhichhara”, apart from innumerable collaborations in the past and present. Currently, he is also working towards his debut solo Rock EP, and also has stepped into the shoes of a Music Producer, having produced a single by Delhi based singer Malini Banerjee to start with.