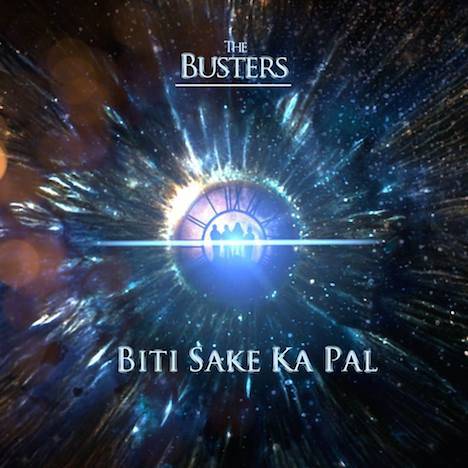 Biti Sake Ka Pal is the Culmination of the Bands 32 years of its existence compiled into one Album. Although the band stayed dormant for about 16 years, the urge for getting into the studio and working on the album grew within them…Finally in December 2014 after a small reunion it sparked off the urge within them to make music and acted as a catalyst for the band to come together and make an album.
The band spend over a year to select the tracks and arrange them, once they had a scratch, they were ready to get inside a Studio….the band entered the studio in late 2015 and continued till October 2016, and it took another 4 Months for the Mix and Master process..finally by March 2017, the Album Biti Sake Ka Pal was finally completed. The Album doesn’t stay true to a particular genre, although the foundation of it is Rock, the genre of each track is dynamic according to the feel of a song…The Album is about the experience of what they went through together as a Band for the last 32 Years. The Band Members dedicate this Album to their past members also those members who are no more in this World along with Family and friends who always supported the Band.
All songs written and composed by Naveen Thapa.
Electric/Acoustic Guitars : Puran Gurung
Bass Guitar: Anish Nair.
Additional Bass Guitar: Roshan Gurung
Drum Programming: Puran Gurung:
Additional Drum Programming: Srikhant Sreenivasan.
Keyboard: John Lopes.
Madal: Bishan
Flute: Palash Boro.
Backing Vocals: Roshan Gurung, Anand Shrestha, Puran Gurung.
All songs Recorded, Mixed and Mastered @ Sound Forest Studios, Mumbai.
Bass Guitar Sessions Recorded @ The Hertz Cave, Mumbai.
All Songs Rearranged and Produced by Puran Gurung .
Co-produced, Recorded and Mixed by Rahul Gurung @ Sound Forest Studios, Mumbai.
Mastered by Prashant Nayar @ Sound Forest Studios, Mumbai.
Associate Recording Engineer: Hitesh Khaneja.
Assistant Recording Engineer: Mohit Verhani.
A BIG HUG TO THE BUSTERS FAMILY…
Sunir Gurung, Sonam Tobgey, Anand Shrestha, Uttam Thapa, Rajesh Lama, Ratan Biswa, (L) Durga Subedi, (L) Deepak Prahan, (L) Raju Sunar, (L) Buddiman Sunar, Rishan Lohar, Uttam  Sharma, Sanju Chettri, Puran Gurung, Krishna Subedi, Roshan Gurung, Arun Rana, Pawan Rai, Hari Thapa, Bijay Lama, Kirti Thapa, Naveen Thapa.
Special Thanks To...
Sonam Lama, S.B Thapa (Tinku), Amar Gauchan, Sanjay Rana, (L) Basu Thapa, (L)Mahesh Gurung, Rakesh Thapa, Manish Thapa, Mahendra Gurung, Rajeev Chettri, (L) Rajeev Thapa, Diwas Rai, Kumar Sarki, Jeevan Thapa, Shiv Pradhan And Jewel Star S.C.Club, R.P.Phawa, Manoj Jajodia, Raju Subba(Lapalang), Suraj Joshi, Rebina Subba, Roshni Subba, Mr Alhek,Vision Band, Havocks (Barapather), Navneet Thapa, Avaneet Thapa, Suk Khonglah, vivek war, priyo laloo, sunny manbha, denim lama, Saurabh Biswakarma.....
Special thanks to Prashant Nayar and Sound Forest Studios, Mumbai.
Amit Kumar (Sound Forest Studios) for supporting us and lending us your amazingly sounding Martin guitar, Prashant Shah (Scribe) and Deep Banerjee for being around and triggering this. little Tashi Gurung for the inspiration, Supriya Gurung and Pranav cholkar for the artwork, Rahul Gurung.. you've been amazing... and a big cheers to "Basu Chettri" for having faith on us... without you this wouldn't have been possible, and to all our family members for the inspirations and for being with us through thick and thin.
about the band

The Busters are a Nepali Rock Band from Shillong...active from 1985 to 2000 they predominantly played in the Shillong Nepali Rock Scene. During the 15 years long run, they were known for playing their Originals...due to unavoidable circumstances they had to part ways...and so it stayed the ...

Visit the The Busters page