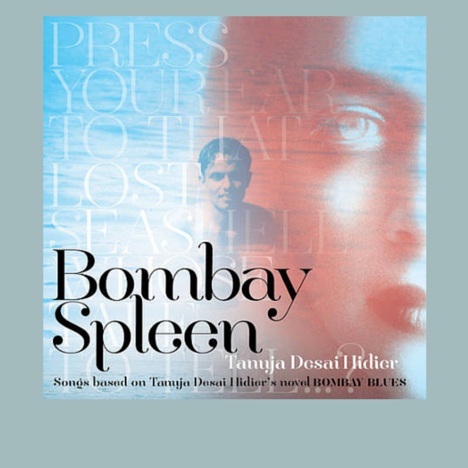 BOMBAY SPLEEN (Igloo By Night Records) is Tanuja’s second album in her groundbreaking genre of the ‘booktrack’: a dozen tracks of infectious electro-dream-pop ‘wreckage rock’ based on her novel BOMBAY BLUES (deemed “a journey worth making” in a starred Kirkus review, “a lovingly detailed homage to Bombay…an immersive blend of introspection, external drama, and lyricism” in Publishers Weekly, and “a chronicle of Bombay cool” in the Hindustan Times), the sequel to her critically acclaimed literary debut, BORN CONFUSED.

Produced by Dave Sharma, featuring Atom Fellows and Marie Tueje and special musical guests including world-renowned trumpet-player Jon Faddis and bassist Gaurav Vaz (of The Raghu Dixit Project), BOMBAY SPLEEN draws from the book’s themes—love, home, cultural history, and the mapping/unmapping of identity—with the musical narrator’s personal journey paralleling that of heroine Dimple’s, as well as that of Bombay’s development itself: from its beginnings as seven islands later reclaimed to become the city we know today.

BOMBAY BLUES (the book) and BOMBAY SPLEEN (the album) launched in the USA at the National Book Festival in Washington, D.C. in August 2014. The official USA release party was held in New York City at (le) Poisson Rouge/Basement Bhangra. For the book/album India release in January 2015, Tanuja performed an acoustic ‘rock-n-reading’ set with album contributor Gaurav Vaz of The Raghu Dixit Project at the Zee/Jaipur Literature Festival (then joined Narcopolis-author Jeet Thayil’s band Still Dirty on vocals, opening for Transglobal Underground in what music stage reviewer Eloise Stevens called “the best music night of the #ZeeJLF…an explosive fusion of literature and music.” The full-house BOMBAY BLUES/ BOMBAY SPLEEN official book/album release party at Café Zoe in Mumbai was a Mumbai Mirror pick of the day.

“Heartfelt, and filled with great melodies and imagery.”

“A ‘Bombay’ song that could easily double up as a James Bond theme…Desai Hidier’s jazzy-pop tune [“Heptanesia”] is a worthwhile addition to the small cluster of non-Bollywood Bombay songs around.”

"Rhythmically heavy, lyrically sharp, and—though it can be savored independently—an absolute must for Bombay Blues readers, bringing as it does the entire tale's world to your ears."

—Zachary Lazar, author of I Pity the Poor Immigrant and Sway

“The hypnosis cast by words and music is a vortex we might be tempted never to leave.”

“Even more magical when you can feel the story on multiple layers.”

“Seek Me In The Strange” selected for the soundtrack of director Liz Hinlein’s feature film Other People’s Children.

Born and raised in the United States, Tanuja Desai Hidier is an author/singer-songwriter now based in London. She is a recipient of the James Jones First Novel Fellowship and her short stories have been included in numerous anthologies. Her pioneering novel, BORN CONFUSED, was name...