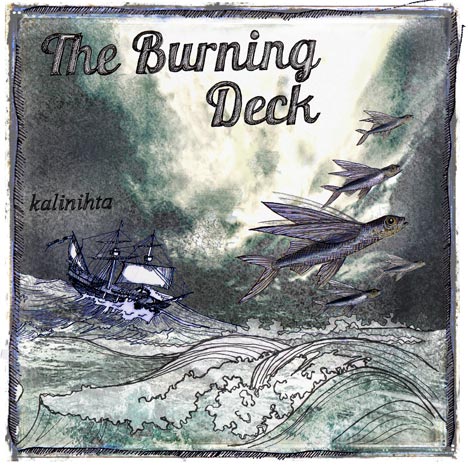 Titled Kalinihta (Greek for Good Night), their debut album is inspired by a poem called Casabianca by Felicia Dorothea Hermans. The songs are sonic voyages through the emotional landscape of the young Casabianca as he stands on the burning deck of his ship waiting for a command from his father to leave his post.
Recorded in the space of five months, Kalinihta is a sound fuelled by the Bristol sound of the 90s, Asian underground, 70s progressive rock, and inspired by the ebbs and flows of the ocean.
The ending may be tragic, but the songs on this album definitely are not. Listen to them and embark on your own personal journey between the devil and the deep blue sea.
Sandeep Madhavan: Synth, Keyboards, Programming, Bass, Vocals
Floyd Santimano: Synth, Keyboards
Vocals on Kalinihta by Vyshnav Balasubramaniam
Vocals on Blink of an Eye by Alexis D’Souza
Recorded, Mixed and Mastered at Gum Grooves Studios by The Burning Deck
CD artwork by Ilana Steenkamp
about the band

The Burning Deck began as a home studio experiment in Richmond Town, Bangalore, India. Sandeep Madhavan and Floyd Santimano’s attempts at sound manipulation birthed a series of songs that bring the story of the boy on a burning deck alive.