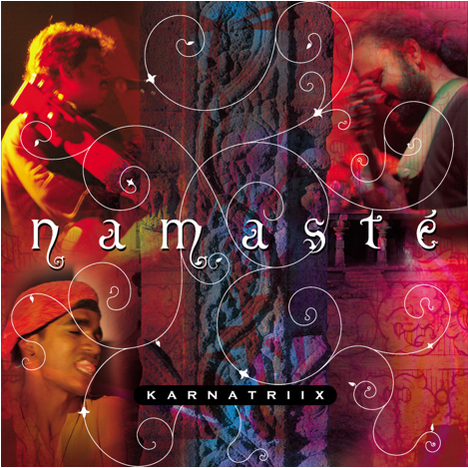 Namaste’, a 45 minute album released in 2008 in India by Indiabeat and distributed by EMI/Virgin was widely acclaimed due to the experimental nature of the compositions and production. The songs woven together under a perception of a ‘trip from dawn to dusk, a dialogue between man and nature and a link between the known and the unknown’ is considered as one of the best concept albums to have come out of the Indian subcontinent. ‘Namaste’ was successful in topping Planet M Charts for two weeks in a row in the New Age/World Music Category. Other than the original mellifluous compositions like Exorcism, Namaste and Delicately Tuned, the album also consisted of the band’s interpretation of Saint Thyagaraja’s ancient masterpiece - Entharo Mahanubhavalu.
In August 2012,   Karnatriix re released the digital version of the album’ Namaste’ all over India through the record label Cochym.
about the band

Karnatriix, guitarist John Anthony’s vision - <;o) - are the pioneers of ‘new wave of contemporary Indian fusion music ’. Their ever-evolving sound was always ahead of its time in its universal appeal, and today registers as ideally in sync with the ...