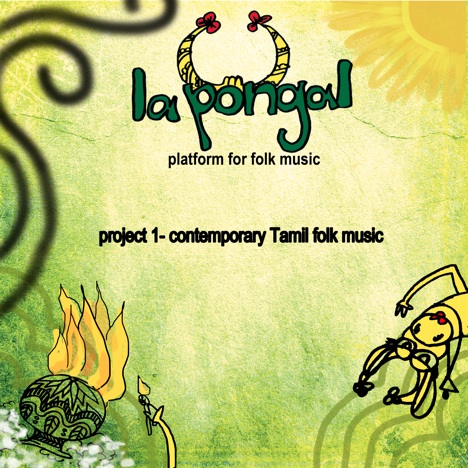 For me, making this record felt like getting back home after an endless journey. What you hear in this album are not just a bunch of songs, but a reflection of Tamil culture, its people, their lives, their stories, happiness sorrows and pain.
In this album we have recorded around 70 folk musicians from different parts of Tamil Nadu (South India), performing music from the land that they come from. The process of putting all of them together was such as fulfilling vibe and the most interesting thing I have done so far. Researching about Tamil folk music and working with folk musicians showed me so much life that I have never seen before.
In this project, I comfortable positioned myself in between two guys, who according to me are musical geniuses in their own right. Anthony Dasan, a mind blowing folk singer/performer and Pradeep, who is the most natural and sensible musician I know. Collaborating with them throughout this project was simply an experience that I would demand an action replay for.
We have handpicked some of the most interesting sounds from various traditional Tamil folk art like Naiyyandi Melam, Karagaattam, Themmangu, Devar Aattam, Thaalaattu, Kuravan Kurathi, Thappattam (Parai Aattam), Thudumbattam, Periya Melam. We have tried our best to carefully layer these forms with some contemporary sounds without displacing their aesthetics. My idea was very simple - to make this music accessible to everyone, no matter which race, region or culture one might come from.
I owe it all to my mother who sane me the first song and introduced me to music. Thanks to Ry Cooder for showing me Buena Vista Social Club, which has been such a big inspiration for creating La Pongal. I also wish to thank my core team Pradeep, Shood and Susha for spending so much time off their personal time to get things done for this project and moreover for sharing my vision.
I hope this project becomes a celebration of Tamil folklore. This albums a dedication to all the folk musicians around the world who are yet to get recognition for the art form they practice and believe in.
According to me, they are the real rockstars.
'Darbuka' Siva
about the band

La Pongal, simply put, is a platform for folks music created by 'Darbuka Siva', that is on a continuous journey exploring indigenous and traditional forms of art. Traditional styles of music gave both to many new expressions. But the taste of the first ever style...

Visit the La Pongal page
OTHER MUSIC BY La Pongal