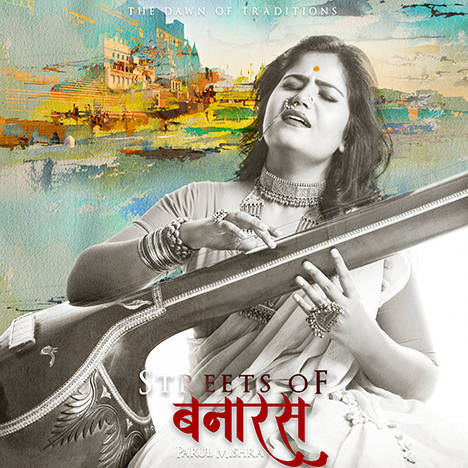 The title Streets of Banaras evokes images of ghats on the Ganges river, a mystic, ancient city which is a curious mix of the archaic and the contemporary. As one winds one’s way through the labyrinth of narrow streets leading from the ghats to the various temples, one gets a feeling of extreme spiritualism that is all-pervading, one that explains the essence of Banaras. This, the most ancient city in the world is renowned for its seat of learning, the Banarsi saree, the Banarsi paan, the Kashi Vishwanath Temple and so many other things and lest we forget, it is also known for being the Banaras Gharana (lineage) of Hindustani Classical music as also the birthplace of the Folk Music of Uttar Pradesh.

Unfortunately in the past few decades, due to increasing westernization of contemporary music, interest in classical or folk music has been waning and limited to an extremely niche group of music aficionados. This has lead to fear among purveyors of Hindi music, that this beautiful music, that is the folk music of Uttar Pradesh will gradually lose its place and be ultimately consigned to the dustbins of history.

Thus, this album is an effort by Parul Mishra, to revive the dying art by combining the traditional with the contemporary so that it is appealing to the generation-next without losing its quintessential Indian-ness.

This album consists of six songs, sung by Parul, with each although being a part of Hindi Folk Music, giving a different feel, a different mood and a different texture.

Parul Mishra originally from Gorakhpur in the state of Uttar Pradesh, India, is an accomplished exponent of the intricate art of Hindustani Classical music. Her first guru, Sri Prakash Pandey was not only her teacher but also her mentor. Although she was learning classical music, she was al...