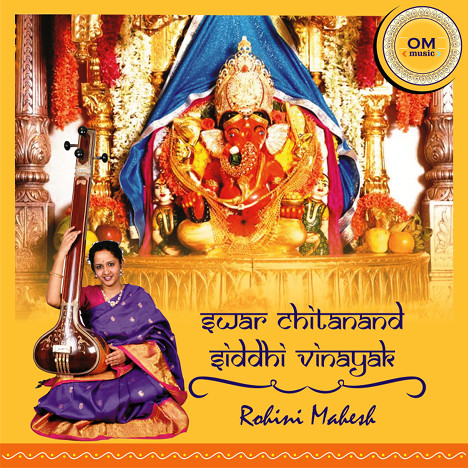 The meaning of the album name “Swar Chitanand Siddhi Vinayak” is “Oh Lord Siddhi Vinayak, You flow as beautiful music from within my inner being, thus granting bliss and peace.”

The album also has a testimonial from globally acclaimed musician and music composer, Shri Shankar Mahadevan, who states "The album truly evokes a spiritual feeling”.
It has been proven several times in the lives of various devotees of this deity,that the Prabhadevi Siddhi Vinayak Ganapati has the power to grant the wishes of any devotee that completely surrenders and prays to Him.
The 'Phala Stuthi' in the Vigneshwara Namaskaara stotram in this album states that any devotee singing this stotra to Lord Siddhi Vinayak, will have all wishes granted.
"Join me in singing the praises of Lord Siddhi Vinayak and stay blessed!"  - Rohini Mahesh
Shri Siddhi Vinayak Ganapati Music Album
about the band

Rohini Mahesh  is a trained Indian Classical Carnatic singer, under the