Anirban Bhattacharyya is a Hindustani classical vocalist of the Patiyala tradition and a budding ethnomusicologist from Kolkata. A senior disciple of Padmashree Ajoy Chakraborty, Anirban aims to break the boundaries between different performance traditions and create a unique space for him. A President of India Gold and Silver Medalist from All India Radio in Khyal and Thumri, and Champion in Thumri from State Music Academy in 2010, Anirban is also a National Scholar in Rabindra Sangeet and regularly performs with the legendary Kathak maestro Padma Vibhushan Birju Maharaj. While studying Ethnomusicology in SOAS London, Anirban has been invited to perform in some of the most prestigious festivals in UK including Darbar Festival, Dartington Festival, and had the privilege of performing in Royal Albert Hall in London along with Shankar Mahadevan. Anirban has performed extensively in television media and is also a playback artiste. Anirban’s academic research on music focuses on the development of concert-culture in Calcutta. 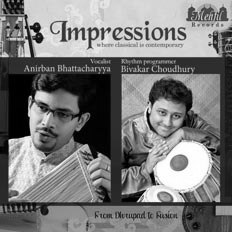 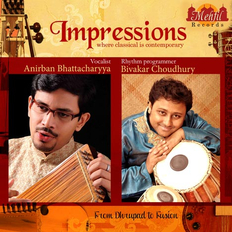