Heretic is an alternative metal outfit that serves as a breakaway from the casual clichés and banal definitions,a few feet outside the periphery of ‘conventional’ in the scene today.Formed in 2005, the Bangalore based band is comprised of five free-spirited musicians turning against the tide. Heretic has stormed some of the biggest venues in India and laid to waste fans and musicians alike with their explosive brand of metal.

The band released a three track EP ‘Reprised’ in 2008, tracks of which got featured in some of the biggest compilation albums and fetched them the limelight of critical acclaim, pushing them closer to cutting a full length record.The band entered the studio in December 2011 to record their debut album with maverick producer Keshav Dhar, of Skyharbor fame.
After months of impromptu jams and conversations at coffee shops, in September 2005, Abhijit Namboodiripad and Hareesh Kumar started putting together the pieces that would eventually form the primeval Heretic, a thrash metal outfit based out of Cochin, Kerala. Months of jamming and tryouts later, the band was still looking for the perfect voice to wield the microphone. This need was finally met by Akhil Unnikrishnan, whose discovery was a matter of sheer good fortune. After further scouting, Arpith Easo Samuel was appointed the Heretic drummer. Benjamin Thomas completed the line-up taking up bass duties and thereby completing the backline as well as Heretic’s essential line-up. With the influx of talent, the band matured and picked up a sound somewhere within the alternative metal sphere. The band paced things up by playing local gigs and competitions, but the real break came when they went on win the Kingfisher Kerala Rocks competition, thereby also landing a contract with Kingfisher for live performances. There was no looking back after then, and Heretic began playing bigger arenas and prestigious festivals like the June Rock Out, Kingfisher Great Indian October Fest, Independence Rock and Yamaha RoXX.A line-up change that saw Kevin Prichard replacing Arpith on the drums, however did not deter the band’s intent and Heretic forged ahead working towards writing new material and recording the debut album. With selective live performance appearances, Heretic concentrated its efforts into the studio, bringing out a high quality record working with renowned producer Keshav Dhar.
Having their talent set in stone with this album, Heretic is poised to take over the live music scene in the coming year by storm. With work already underway for the next album, Heretic promises to reach greater heights and affect greater numbers with their brand of beautifully aggressive music.
Acclaim:
1. The song ‘Bleed to heal’ was featured on the Soundclick.com alternative metal charts, and was an instant hit, sailing to the top 100 among over 19000 songs within a week.
2. ‘Reprise’ was featured on compilation albums such as Great Indian Rock (Or was it Independence.. not sure), Headbanger’s India International Connection etc. It was also selected for airplay on a French metal radio station.
3. Heretic has been featured in major “scene” magazines and webzines such as TNT, IndianRockMP3, HeadBangers India etc. Heretic has also had press coverage in the cities of Bangalore, Cochin and Chennai from major national dailies.
contact
http://heretic.co.in/ 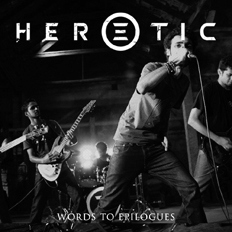 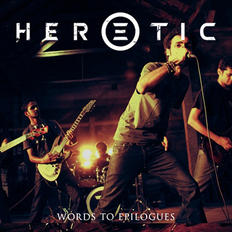 Words to Epilogues
by Heretic